On the back of a slew of high profile releases and signings, Saytek brings his inimitable live set to Manchester’s Up Close and Personal. 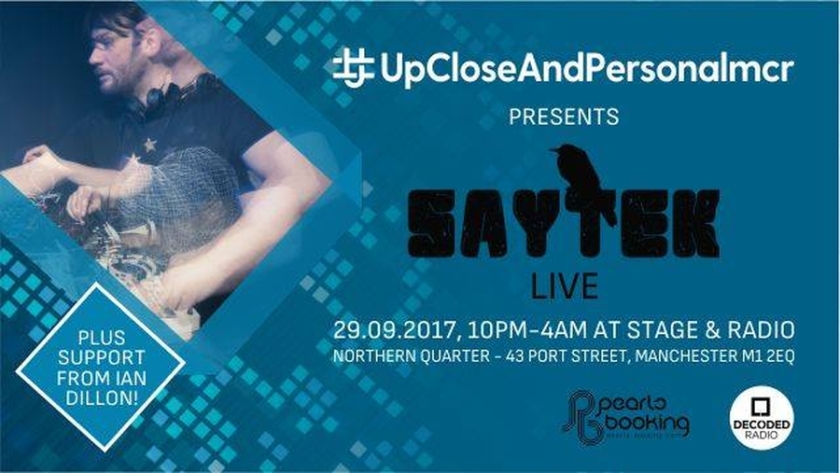 On the back of a slew of high profile releases and signings, Saytek brings his inimitable live set to Manchester’s Up Close and Personal. The Waveform Transmitter’s Ste Knight has the details.

Saytek has been cooking up quite the storm of late. His Live Jams series of releases have been very well received by listeners, critics, and peers alike. So much so, that he has had tracks signed to illustrious underground labels such as Kevin Saunderson’s KMS Records, Marshall Jefferson‘s Freakin303 imprint, and Mr.C‘s Superfreq (the latter describing the decision to sign Keevil as a no brainer, his sound matching that of Superfreq perfectly).

It is undoubtedly the energy and diversity in his live shows that sets Saytek apart from his fellow artists. His ability to manipulate a plethora of analog synths, bending circuits to his will, that has garnered all this attention. He masterfully utilises his setup to such outstanding effect, that we’re pretty sure Octave One will be wondering what they’ve been doing wrong all this time.

Luckily for us up here in the North West, we have the opportunity to catch Saytek at Manchester’s Upcloseandpersonal, which takes place at Stage and Radio on Port Street in the city’s stylish Northern Quarter on September 29th.

Tickets are available now from the Upclosenandpersonal web page, here. We’ll be seeing you down the front…