Halcyon gear up to let one Reinier Zonneveld loose this weekend. The Waveform Transmitter’s Paddy Hooley looks forward to an extra special extended live set from the well-respected label head. 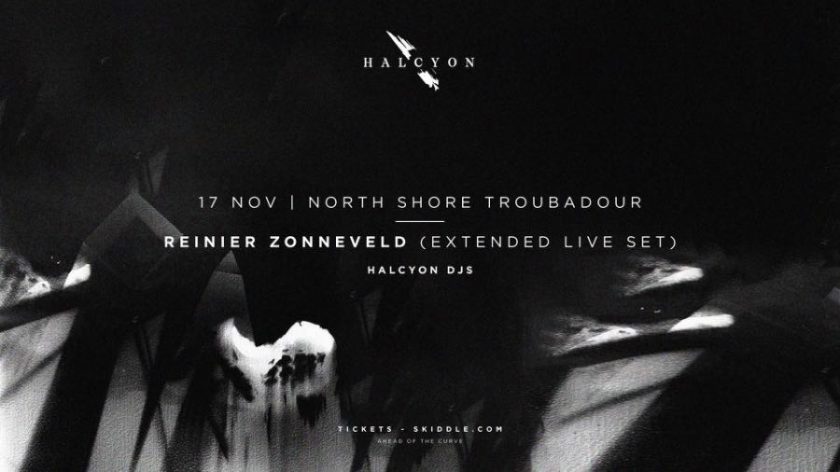 Halcyon gear up to let one Reinier Zonneveld loose this weekend. The Waveform Transmitter’s Paddy Hooley looks forward to an extra special extended live set from the well-respected label head.

Friday 17th November sees the second event of Halcyon Liverpool’s winter season. The innovative dance music outfit has an impressive history of dynamic bookings, bringing a host of established and yet-to-explode names to the city. The announcement of three nights at once was a bold statement for Halcyon, as they look to extend their impressive year’s roster of headliners that includes the likes of Mark Reeve, Layton Giordani, Bart Skills and Luca Agnelli.

This weekend’s event draws crowds to North Shore Troubadour, an impressive warehouse venue that was left in shock after Boxia rattled the roof, taking the dockside dancers on a trip into dark and commanding techno. Filth on Acid top dog, Reinier Zonneveld, headlines proceedings on Friday; a hardware hero and skilled selector who has crafted his way into the top tier of techno playing alongside Adam Beyer and Amelie Lens and headlining stages at Awakenings Festival (Amsterdam) and Off Week (Barcelona).

Zonneveld, 26, has been creating music since the age of 4, learning classics and eventually translating his skills into incredibly technical live sets. His imprint Filth on Acid includes releases from some of the most respected and exciting producers in techno, featuring the likes of Emmanuel Top, Charles Fenckler  and  previous Halcyon booking Coyu.

Halcyon’s third event of the series ends the year with yet another Liverpool debut in the form of German collaborators SHDW & Obscure Shape – introducing  Liverpool to a world of music previously only experienced at prestigious events such as Reaktor NYE (Netherlands) and in the dark corners of the Berghain, Berlin.

You can purchase tickets (only 50 left), for Halcyon w/Reinier Zonneveld, here.

23 year old writer, DJ and techno enthusiast, based in Liverpool, UK. View all posts by phwaveformtransmitter