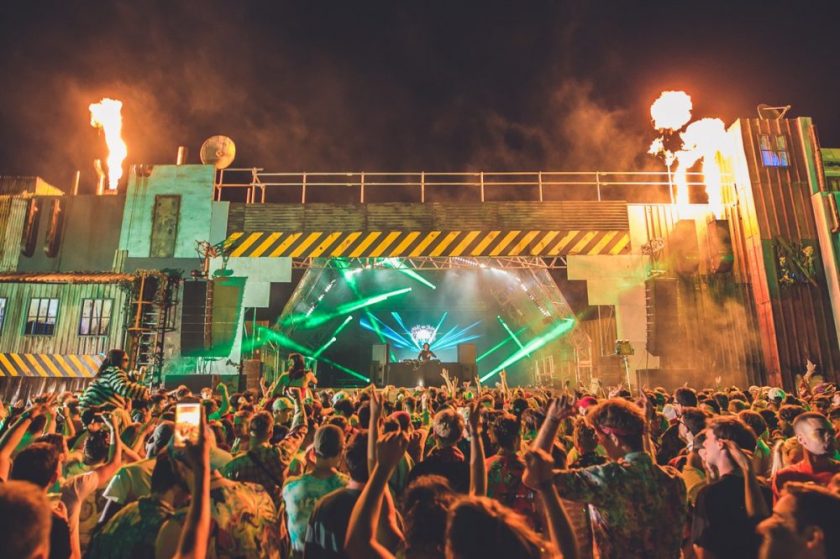 Farr Festival opens its doors to the public tomorrow for a festival with a fully packed-out line up. The Waveform Transmitter’s Cameron Barnfield weighs in with a guide on who you DON’T want to be missing at 2018’s edition.

Under the canopy of Bygrave Woods, an uninhabited forest in the heart of Hertfordshire, Farr’s busy organisers have been working for months to install the ninth edition of the festival. Those who have been before will be very aware of Farr’s attention to detail and ultimate elation – with a handpicked selection of brilliant food and drink vendors and soul-enriching activities accompanying the surroundings and soundtrack of the weekend.

Again, those who have been before will also be very aware of Farr’s spellbinding line-ups over the past nine years. In the past the pines and the punters have had their body rocked by some true underground luminaries, with the festival presenting us with an eclectic who’s who of underground music. The past years have been blessed with a 6-hour B2B from Ben UFO, Joy Orbison and Midland in 2016, sets from the Nordic disco don Todd Terje, German electro goddess Helena Hauff, D&B legends dBridge and Skeptical and much, much, more.

In an ideal world, journos and reporters would be able to write without prejudice and too much of their own opinion – however Piers Morgan now presents Good Morning Britain so I’m therefore allowed to rave on about this brilliant duo. Their work, often referred to as ‘post-dubstep’, is an oozy dissection of the shuffling high-hats and beats of UK underground music merged with grungy guitars and the everyday ambience of the street. After their 2010 debut (and one of my all-time favourite albums) Crooks & Lovers was met with critical acclaim, the electronic group have been propelled into a category not many artists have been able to – making unrivalled, authentic tunes only they could make. Following on from touring their third and latest LP Love What Survives, Mount Kimbie are fresh and ready to take you on an aural roller-coaster through drones and modular ticks to thick analogue basses sewn together with chops and cuts of wailing vocals and the shuffle of life. This is not going to disappoint.

Part of the Narod Niki project – a collective laptop jam initiated by Ricardo Villalobos and Richie Hawtin, Thomas Franzmann AKA ZIP AKA Dimbiman is a familiar figure to dancefloors around the world. Although not as ubiquitous as the project’s founders, ZIP is clearly a figure of admiration amongst those in the know and this can simply be discovered by listening to one of his very few mixes available online. His shifts through minimal landscapes of 4/4 dancefloor fillers infused with infectious vocals and bouncing percussion are going to be very special when reverberating from the shack of Ma Dahu’s, Farr’s new stage equipped with a Funktion One soundsystem. If that wasn’t enough, the Perlon kingpin is going to be showering us with a 4 hour extended set of stompers. Oh…and did I mention that there’s a jerk chicken shack there. Bloody gorgeous.

I’m sure that a certain editor may enjoy this selection as it spells what spaghetti letters he devours first thing in a morning – A, C, I, D. If their name eludes you then you have played into their ethos; no press, no promotion and no interviews. An enviable collection of vintage gear and some perfectly picked vocals have propelled them and their chugging basslines to the very top of the game. Driven by lines of 303 and scatterings of vintage hi-hats, Paranoid London’s sound is polished with vocals that sound like someone’s chucked Shia Lebeouf into the heart of the hacienda; the result is a maddeningly good collection of acid house sure to rumble a few feathers.

Catch Paranoid London at the Adventures in Success stage on Saturday (23:00-00:00)

Zak Khutoretsky, also known as DVS1, is a man with a staggering ability to control the dancefloor and a mouth-watering 30,000 records to do it with. Resident at the illusive Berlin club Berghain, Khutoretsky’s love and knowledge of techno is transcribed into his mixes, where the Minneapolis DJ really flexes his muscles. Farr’s wonderful programming means that we, the lucky ones, are again treated to a 2 and a half hour set. Expect to be taken on a journey through the darkest depths of DVS1’s collection of jacking Chicago beats and thumping industrial rockets, captured and jarred straight from the sweaty rave cave of the German capital.

One of the most astounding things about Farr is not just it’s meticulous and ballsy programming but the sheer variety and quality of the acts booked. From techno demons to the woozy jazzy jams of Tom Misch, Farr have delivered an exciting and all-inclusive line-up. Mafalda is the secret gem of this line-up. Get down early to The Shack on Friday (hosted by the familiar faces of Liverpool’s Abandon Silence) and shake off the robotic rhythms of Thursday’s electro kingpin DJ Stingray with some feel good funkadelic jazz, soul and disco. Mafalda is one of the most exciting and tasteful selectors in the game; the co-founder of Floating Point’s Melodies International has an unrivalled passion for digging and finding the warmest soul-lifting tunes perfect for the historic and primordial stage of The Shack.

Synonymous with her label Minimal Wave, Veronica Vasicka’s digging skills and ear for the weird and wonderful underground synth records from the 70’s and 80’s have propelled her into the limelight around the globe. Vasicka’s mixes are full of driving synth-electro combined with the gorgeous melodic moments and off-kilter taps of the minimal scene. I can confidently say that there will not be a mix anywhere near Vasicka’s sound this weekend. Imagine the Pet Shop Boys were clad in black leather and given the production ability of Villalobos – you almost have a grasp of the weird and wonderful world of Vasicka.

Hailed by Boiler Room as “one of dance music’s prosperous newcomers”, O’Flynn is a young producer from London with an already impressive catalogue of tunes. Those who are familiar with O’Flynn will appreciate the sheer brilliance of his productions and DJ sets. Filled with tribal percussion, beautiful forgotten vocals and atmospheric synths, the London DJ promises to bring a range of sounds to The Shack; from disco edits, to tree-shaking house tunes, to the atmospheric breaks akin to his rapturous ‘Desmond’s Empire’ and more. As the young producer has proved with his productions, O’Flynn is a man working with little boundaries and his set will undoubtedly be a display of this.

I mean, what can I say about the OG, Mr. G. A legend amongst legends. Although the term ‘legend’ is one thrown about too casually in the world of dance music, Mr. G’s illustrious career spans two decades and is one widely respected as pioneering for the genre. Mr. G made a name for himself in the early 1990s with his Detroit-tinged spin on techno and electro, however his 2001 remix of Roger Sanchez’s house classic ‘Another Chance’ propelled him into the spotlight. With a string of exciting releases on Defected and other labels, Mr. G went from strength to strength slowly building his reputation as one of the most exciting and fluid performers in the game. His live set is one regarded by many as a must see as the G-man takes the funk to a whole new level, winding his way through thumping high-octane Detroit house and techno. Complemented by Mr. G’s envious dancing, the Derby-born icon is sure to bring the heat to the forest.

Sophie Wilson, or Willow as she is better known, is somewhat a newcomer to the scene. However, her late night slot wrapping up proceedings on the Saturday is evidence of the raw talent in Wilson’s production and selection. Propelled into the spotlight by ambient techno don, Move D, Willow’s breakthrough tune ‘Feel Me’ beautifully blends elements of R&B and dance music. Through subtly shuffling synths and rolling sub basslines, Willow’s few songs are characterised by a gorgeous, muffled warbling that warm the soul and move the most static dancefloor. After a few years of gigging, the Manchester born producer and DJ has made waves in the scene and this will almost definitely be a set jam-packed full of low-slung gems and special moments yet to be engrained in the memory of Farr Festival 2018.

Galcher Lustwerk makes the type of house found in the depths of the ‘lo-fi study’ mixes on Youtube, with a smooth but groovy mixture of sounds. Following on from the genre-merging nature of Willow, Lustwerk is also a man with a finger in multiple audial pies, beautifully blending the spoken rhymes of hip-hop with some silky late-night synths. His music, sometimes described as Brooklyn house, has calming rudiments that put the listener into an almost trance-like state. His 2013 ‘100% Lustwerk’ mixtape illuminates Lustwerk’s propensity to invite the listener into his world of rhymes and lucid synths; an almost soundtrack to dreams and the workings of the subconscious mind. Lustwerk’s set promises to be one full of delight and spine-tingling soundscapes coupled with his mastery of stripped-back lyricism.

So, there you have it. Ten artists you need to get a glimpse of at this year’s Farr Festival. There’s nothing left to say now other than…see you in the forest!