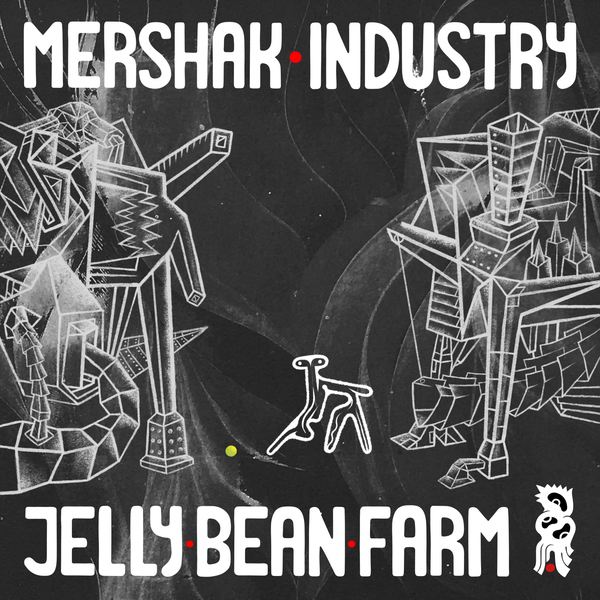 Mershak is back with a new solo release on Jelly Bean Farm. The Waveform Transmitter’s Sam Halligan takes a listen to four .

The latest instalment on Ganesa’s Jelly Bean Farm imprint comes from the ever versatile Mershak, with a six track EP exhibiting his new, consolidated sound. Following an array of dubstep-driven releases on the likes of Encrypted Audio and Surfase Records, Industry marks the LA-based producer’s first solo release on JBF –after previously featuring on the 2017 Exit compilation and Squane’s Collab Cuts earlier this year.

The aptly-named opening track, Arpochondriac, gets straight down to business with schizophrenic, arpeggiated chaos; modulated to precision, this demonic, acid-esque arrangement weaves sporadically in and out of focus, paving way for bouncing squares and hefty drum-work in between.

Technical exhibits stylistic elements we’re more familiar with from the producer’s past JBF releases. From headbopping rhythms to experimental beeps and boops, frantic percussion to sweeping bass, heavy subs to rich foley; this showpiece keeps you on your toes from start to finish – the attention to detail is almost frightening.

Title-track Industry is another brilliantly ominous affair. It’s fragmented structure and sinister synth-line could send chills down the spine of John Carpenter himself. Syncopated drums and distorted bass hits only complement the tracks ferocity, with deep dubstep undertones cementing the rarefaction of Mershak’s new production style.

Behind Them further displays the producer’s versatility, opting for a more emotive, break-infused piece. A personal favourite, this captivating roller tugs at your heartstrings with its stirring bass-synth and poignant vocal delays. Piercing pads and tempered bass-work provide additional depth, with metallic breaks making up the remainder of the framework in this unexpectedly fervent composition.

Closing things up is the less club-focused Orbital. Adopting a slow-cut electro vibe, this atmospheric-laden progression cruises by in an obnoxious yet oddly relaxing fashion, with its deep subs and percussive overtones again taking inspiration from the producer’s dubstep tendencies.

Overall, Mershak’s unique, ingenious fusion of UK Bass, Techno, and Dubstep serves him a more than worthy recipient of Jelly Bean Farm’s eighth release, with this gem of an EP speaking for itself.

Industry is available now from all good online retailers.