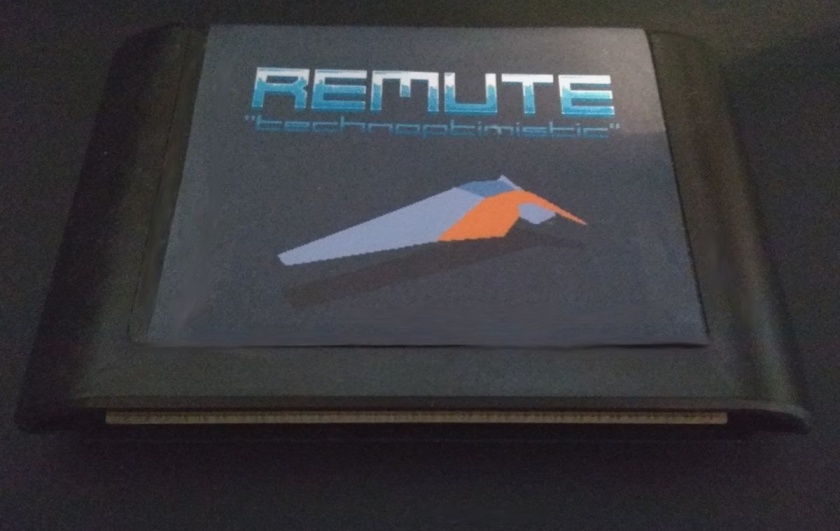 Remute is planning to release his next album, Technoptimistic via a Megadrive Cartridge! The Waveform Transmitter‘s Simon Huxtable has the details.

For those of a certain age, Sega Megadrive was the king of the home gaming consoles. Sure, your older siblings probably had a Spectrum ZX or Commodore 64, but the faff of loading a tape was more than you could bare. And with good reason, Sega (and Nintendo) blew everything out of the water when they reinvented home entertainment in the 1990s.

In recent times, the retro-gaming console has seen something of a revival, not least by a revitalised over-30s market, whose children are old enough to enjoy ‘games that dad played’ in semi-ironic awe. But also, because of fear. Visceral to many of the modern psyche is the notion that “robots will take our jobs” as we lurch ever more quickly towards digitisation.

Fueled in part by this, and equally, looking for a unique selling point, Hamburg-based techno artist Remute has unveiled plans to release his new album, Technoptimistic, in March as a limited edition Sega Megadrive cartridge – the first to ever do so. “In times where the term ‘digitization’ triggers dystopian fears and worries, I wanted to provide a soundtrack for an optimistic vision of a technologic future with man and machine in unison.” Remute said, continuing his long term goal of marrying man and machine through his creativity.

“The machines work for us. We program, they execute. Technology helps us with uncomfortable tasks, makes us do adventurous things and can even cure us when we’re ill. If we maintain a positive attitude towards technology, it will enhance our minds and take us to far places. That’s why I am TECHNOPTIMISTIC.”

No stranger to old tech, Remute‘s last album in 2017, the highly acclaimed Limited was released on floppy disk and showed just what was possible with the jaw-droppingly tiny 1.44 megabytes available. Imagine the possibilities he has with a whopping 5MB on the standard Megadrive cart! As the first techno music album to be programmed specifically for this format, and completely generated in real time, Remute’s Technoptimistic album is pushing the 90’s game console soundchip to the maximum. Featuring 16 tracks, it is sure to be the most unique artist album released this year.

Remute‘s new album TECHNOPTIMISTIC  is released on 22nd March 2019. You can pre-order here.